"In a stunning demonstration of how far AI capabilities have come, AlphaStar — a new AI system from Google’s DeepMind — competed with pro players in a series of competitive StarCraft games. StarCraft is a complicated strategy game that requires players to consider hundreds of options at any given moment, to make strategic choices with payoffs a long way down the road, and to operate in a fast-changing environment with imperfect information. More than 200,000 games are played every day.

The demo was streamed live on YouTube and Twitch and had been highly anticipated — not just among gamers but also among AI enthusiasts — since it was announced on Tuesday.

The results were stunning: AlphaStar won all but one of the games it played." 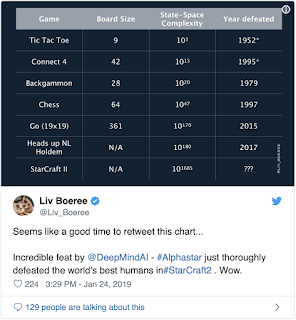 StarCraft is a deep, complicated war strategy game. Google’s AlphaStar AI crushed it. | Vox
Posted by pbokelly at 6:20 AM