There Are Five Different Races in Streaming TV. Here’s Where Apple Fits In. | WSJ

Apparently not yet completely "cracked"


"It is among the many companies that are playing in multiple categories. Its Apple TV+ service, announced last week, aims to create original programming, such as “The Morning Show,” a drama about a talk show featuring Jennifer Aniston and Reese Witherspoon, and the space drama “For All Mankind.”

It also has a separate Apple TV Channels service, which is more of a streaming hub, letting users sign up for HBO, Showtime and Starz, among other on-demand video options. All of this is quite different—and less ambitious—than Apple’s initial hopes of building a replacement to cable TV that would allow ad-free viewing.

In some ways, Apple is emulating Amazon.com Inc., which competes with Netflix in original streaming entertainment but also runs Amazon Prime Video Channels, not unlike Apple TV Channels. Google’s YouTube is also a player in multiple categories." 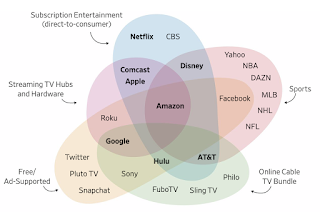 There Are Five Different Races in Streaming TV. Here’s Where Apple Fits In. | WSJ
Posted by pbokelly at 7:33 AM