A big day ahead for Apple


"Apple Inc. has a lot to live up to with its earnings report coming on the heels of a rally that has added almost $300 billion of market value this year.

The shares are up 44 percent from a 21-month low touched in early January after worse-than-expected iPhone sales prompted the company to cut its fiscal first-quarter revenue forecast.

The rebound was partly driven by Apple’s new digital services. But Wall Street has grown increasingly skeptical of the gains. With only 22 of 46 analysts assigning buy ratings, the stock has the smallest percentage of bullish recommendations in at least two years, according to data compiled by Bloomberg." 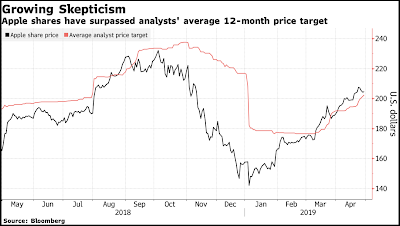