"The most daring by a long way is vw. The German group’s heft—it produces 10m cars a year—affords it economies of scale only Toyota could hope to match. The €30bn vw plans to spend on developing evs over the next five years, plus €50bn to fit them with batteries, leaves all other carmakers in the dust. In March Herbert Diess, its chief executive, promised 70 new electric models by 2028, rather than 50 as previously pledged, and 22m evs delivered over the next ten years. The company is contemplating a huge investment in a “gigafactory” to supply its own batteries rather than depending on outside suppliers.

vw is already developing a dedicated platform and converting entire factories to ev production. The first, at Zwickau in Germany, will eventually turn out 330,000 cars a year for the vw brand as well as Audi and seat. Its medium-sized id hatchback, to be shipped next year, will cost around €30,000, similar to an equivalent diesel-powered Golf, and travel 400-600km (250-370 miles) on a single charge. On April 14th in Shanghai Mr Diess unveiled a sport-utility vehicle to compete with Tesla’s snazzy Model x in China from 2021. Once the range of evs reaches full production in 2022, vw believes, such models will start breaking even. By 2025, when it hopes one-quarter of its output will be electric, they should be as profitable as petrol cars." 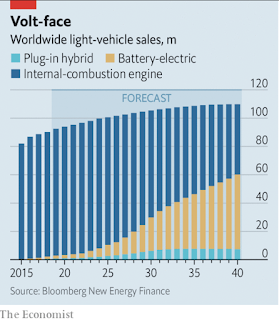 Big carmakers are placing vast bets on electric vehicles | Economist
Posted by pbokelly at 7:43 AM