Social-gaming company Zynga Inc. is holding discussions with potential investors about raising around $250 million in new funding in a deal that could value the three-year-old start-up at between $7 billion and $9 billion, according to people familiar with the matter.

In April Zynga filed papers authorizing the issuance of new stock that valued the company at about $4 billion. 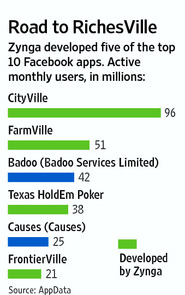