Rising Cloud Bills May Get a Breather -- WSJ

Later in the article: "Investors still should expect cloud spending levels to remain robust over the longer term as demand for these companies’ services continues to soar. Goldman Sachs estimates that, by the end of next year, 34% of enterprise workloads will be running on public cloud services of the type offered by Amazon, Microsoft and Google compared with 18% today."


"The enormous, so-called “hyperscale” networks owned by Alphabet Inc.’s Google, Amazon.com , Microsoft and Facebook demand a staggering amount of capital expenditures. That spending is now an important revenue stream for a long list of other tech companies that supply key components such as chips, software and networking gear. 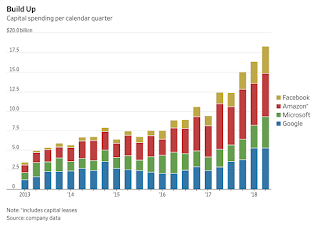 It is a big food chain that’s gotten much bigger quickly. Total capital spending by the four aforementioned companies has jumped by an average of 45% on a year-over-year basis for the past six quarters. The four spent a total of $34.7 billion in the first six months of this year—up 59% from the same period last year. But analysts for Morgan Stanley expect that pace to decelerate to growth of 45% for the second half and warned in a note this week that it could slow further to “low double digits” next year."

Rising Cloud Bills May Get a Breather -- WSJ
Posted by pbokelly at 7:39 AM