Apple is apparently good at making everything except quarterly financial forecasts.  From the table below, it’s clear that the iPad is doing exceptionally well, regardless of outsider forecasts, and that perhaps Mac laptop customers/prospects are following Walt Mossberg’s advice and waiting to see what happens next with the MacBook Pro.  It’s also interesting to note that iPad revenue (significantly) surpassed Mac revenue, for the latest quarter (as it also did in Apple's Q1 2012, but not the year-ago quarter).


““We’re thrilled with sales of over 35 million iPhones and almost 12 million iPads in the March quarter,” Apple CEO Tim Cook said in a statement. “The new iPad is off to a great start, and across the year you’re going to see a lot more of the kind of innovation that only Apple can deliver.”
Guidance for the June quarter is a bit lower than expected with EPS of $8.68 on $34 billion in revenue as opposed to the $9.92 on $37.4 billion expected by analysts, but Apple’s guidance is typically comically low.” 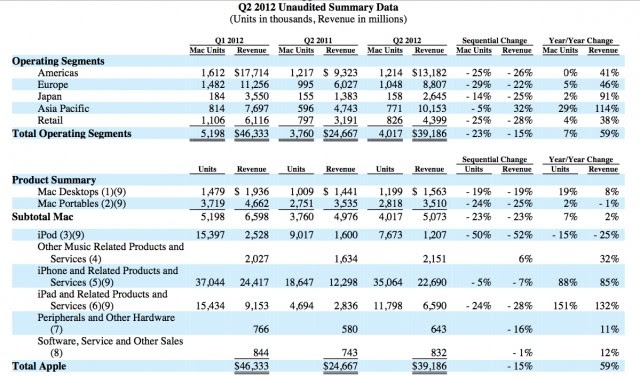