Later in the article: "That dominance means Google sets the standard for what the internet is supposed to be. And in that vision, advertising and user data collection are the defaults."


"It’s another example of how the Alphabet Inc. unit’s power has grown to the point where regulators from India to the European Union are looking for ways to keep it in check. The EU has already fined Google for breaking antitrust laws in the markets for online search, display advertising and mobile operating systems. Chrome is an important cog in Google’s digital ad system, distributing its search engine and providing a direct view for the company into what users do on the web.

Few home-grown Google products have been as successful as Chrome. Launched in 2008, it has more than 63% of the market and about 70% on desktop computers, according to StatCounter data. Mozilla’s Firefox is far behind, while Apple’s Safari is the default browser for iPhones. Microsoft Corp.’s Internet Explorer and Edge browsers are punchlines." 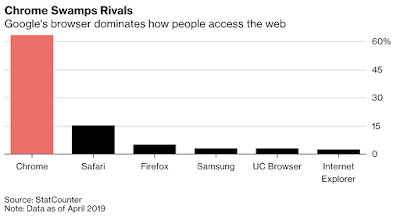