“BlackBerry Ltd on Friday revealed a worst-ever $4.4 billion quarterly loss, and said it is hardly selling any of its new line of smartphones.

But the company's stock rose after the man now at the helm pledged a new manufacturing deal and a renewed focus on software and services will help BlackBerry eventually turn a profit. 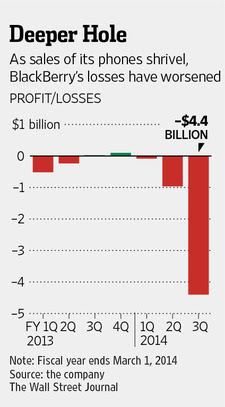 The company has taken a total of $2.6 billion in inventory charges in the past two quarters, and would have been on the hook again next quarter for unsold phones. In the latest third quarter, BlackBerry said it sold only 1.1 million of new phones—at its peak in the fourth quarter of 2010, BlackBerry shipped 14.6 million smartphones.”