Battle of the internet giants: Survival of the biggest | The Economist 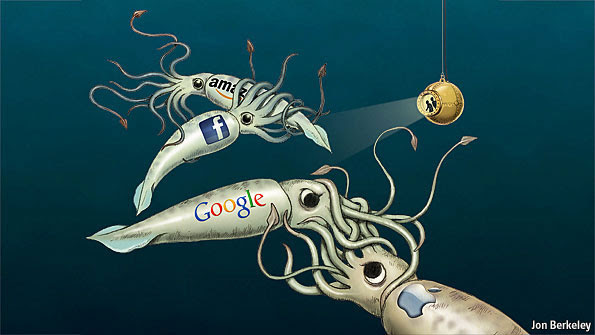 “THE four giants of the internet age—Google, Apple, Facebook and Amazon—are extraordinary creatures. Never before has the world seen firms grow so fast or spread their tentacles so widely. Apple has become a colossus of capitalism, accounting for 4.3% of the value of the S&P 500 and 1.1% of the global equity market. Some 425m people now use its iTunes online store, whose virtual shelves are packed to the gills with music and other digital content. Google, meanwhile, is the undisputed global leader in search and online advertising. Its Android software powers three-quarters of the smartphones being shipped. Amazon dominates the online-retail and e-book markets in many countries; less well known is its behind-the-scenes power in cloud computing. As for Facebook, if the social network’s one billion users were a country, it would be the world’s third largest.”

Battle of the internet giants: Survival of the biggest | The Economist