See the full article for more details, and this Google blog post for more positioning etc.

The giant Internet search service yesterday joined with cellular carrier T-Mobile USA to unveil the first cellphone based on Google software. It's an aggressive bid to pry open the market for advanced wireless smartphones.

Cole Brodman, chief technology officer for T-Mobile USA, noted only about 16 percent of Americans use their wireless phones to access the Internet. "We're going to change all that," he said.

But the new phone, the G1 from Taiwan's HTC Corp., contains few breakthrough features and seems unlikely to challenge the popularity of rival smartphones like Apple Inc.'s iPhone. "I don't think that this phone itself is a groundbreaking thing," said Jane Zweig, chief executive of telecom research firm the Shosteck Group in Columbia, Md.

While I expect the G1 may accelerate delivery of the rumored iPhone-with-keyboard, I still believe Google's strategy of directly competing with Apple, Blackberry, Symbian, and Windows Mobile may also backfire, leading mobile communications device and service provider players to reconsider Google's place on their complementor ... competitor continuum.

After weeks of hype, T-Mobile’s G1 phone, which runs on Google’s mobile phone software Android, finally debuted Tuesday. But it immediately ran into a roadblock: the iPhone comparison. 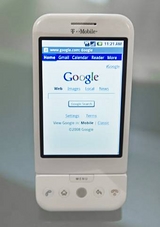 You, sir, are no iPhone

“As with the other smart phones currently on the market we do not see the G1 being an ‘iPhone Killer’,” research firm Atlantic Equities said in a note. “It will be difficult for Google to challenge this in the near term.”

Goldman Sachs added that the G1 appears to be a “step one,” noting: “We leave considerations of the beauty (or otherwise) of the G1 relative to the iPhone to the eyes of each beholder.”

Technology research firm Gartner was kinder. Carolina Milanesi, Gartner’s research director for mobile devices, said the G1 puts pressure on suppliers like Motorola and Nokia. But while the G1’s interface, usability and applications make it “the closest thing I’ve seen to the iPhone,” it falls short of the phone’s iconic status, she said. “The Apple brand is so much stronger.”

“Apple sets the bar pretty high,” chimed in Forrester Research analyst Charles Golvin. IPhone users fall into two camps, he said: tech enthusiasts who were already using wireless-data services on their cellphones, and more mainstream consumers who “had an awakening” when they began using the iPhone’s applications.

Google’s new G1 phone announced today is the first real competitor to the iPhone. Like Apple’s product, it’s a serious handheld computer with a powerful new operating system (called Android) and a clever touch-based user interface. Like the iPhone, it’s likely to be a major new platform for third-party software. But it’s also very different, and may appeal to different buyers.

In sum, the G1 is a powerful, versatile device which will offer users a real alternative in the new handheld computing category the iPhone has occupied alone.