Later in the article: "The onslaught of clean power is coming largely at the expense of coal, which only a decade ago supplied more electricity in the U.S. than anything else. The mining industry is collapsing even as President Donald Trump works to restore coal to its former glory by gutting environmental rules."


"For the clearest sign yet that renewable energy has gone mainstream, consider this: Clean-energy resources supplied more of America’s electricity than coal for the first time ever in April.

Hydroelectric dams, solar panels and wind turbines generated almost 68.5 million megawatt-hours of power in April, eclipsing the 60 million that coal produced that month, Energy Information Administration data released late Tuesday show. That’s the most clean power the U.S. has ever made -- and the least coal it has burned for power in years." 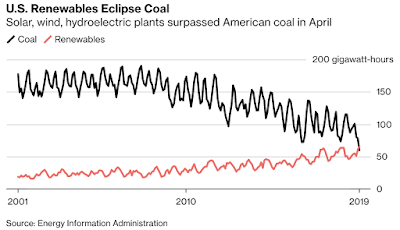 For First Time, Renewables Surpass Coal in U.S. Power Mix | Bloomberg
Posted by pbokelly at 7:17 AM