Excerpt from an Apple reality check

The company’s share price has risen by 83% in the past year, and by almost 50% so far in 2012. Apple is now easily the largest company in the world by market capitalisation, at some $565 billion. It looms over Exxon Mobil, which is worth a mere $408 billion. Since the start of this year it has added $187 billion to its valuation, roughly equivalent to the entire market caps of companies like Procter & Gamble, Johnson & Johnson and Wells Fargo. Apple is larger than the American retail sector combined. 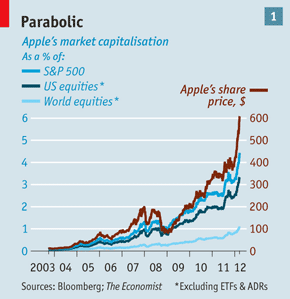