BlackBerry, Aiming to Avoid the Hall of Fallen Giants - NYTimes.com

From a stark RIM reality check

The first — the one that Mr. Heins is clearly aiming for — is a triumphant comeback after a near-death experience. Think Apple and its iMac. RIM is on the verge of upgrading its PlayBook operating system — now with, among other things, e-mail, a feature that the original PlayBook bafflingly lacked — and will release the BlackBerry 10 OS this year.

Behind Door No. 2 is a gradual decline and diminution as rivals like Apple, Google and Microsoft devour most of the market; to some degree, they already have. BlackBerry would keep the scraps — a small but dedicated following of corporate and government customers who want its proprietary messaging and security features.

Then there is the third option: oblivion.

From Ups and downs of RIM’s stock (The Washington Post) 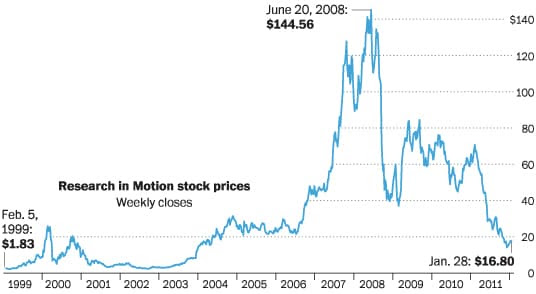 BlackBerry, Aiming to Avoid the Hall of Fallen Giants - NYTimes.com

wow looks like it jumped up really high in 2008!
Thank you for the interesting data, Peter!