Groupon traffic drops by half while LivingSocial surges | ZDNet

Online intelligence firm Experian Hitwise is reporting that Groupon’s weekly U.S. traffic rates have dropped off by almost 50 percent last week since its peak during the second week of June 2011. Although Hitwise acknowledges that figure represents only web-based traffic but not include mobile or apps traffic. 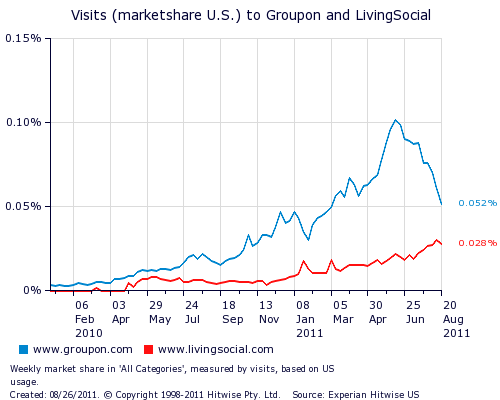 However, based on the same rules above (web-based only in the U.S.), domestic visits to Groupon’s chief competitor LivingSocial has surged by 27 percent.

Groupon traffic drops by half while LivingSocial surges | ZDNet