The initial public offering, the largest by a United States Internet company since Google’s offering in 2004, was a major test of investor demand for the new wave of fast-growing social Web companies. Valuations for start-ups like Groupon, Facebook, Twitter and Zynga have been surging in private secondary markets in recent months. Thursday’s market action was an indication that investors’ appetite for these businesses had not waned despite questions of whether sky-high valuations were justified.

Linkedin’s shares opened on the New York Stock Exchange at $83 — up from its I.P.O. price of $45 — and rose as high as $122.70 before paring their gains. The shares closed at $94.25, giving the company a market value of roughly $9 billion — more than four times the value of an early Internet king, AOL.

But this Internet boom is different in many ways from the last one. 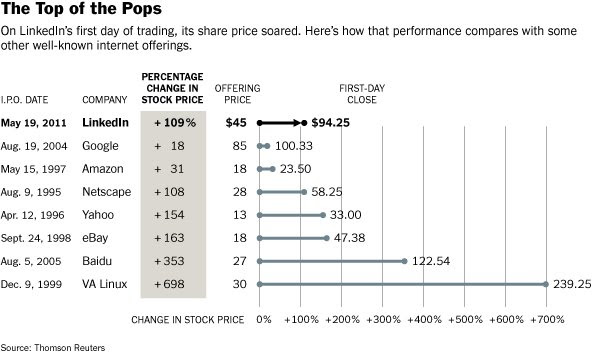 p.s. in case you’re wondering what happened to VA Linux, from this CNet article:

VA Linux Ssytems changed its name in 2001 to VA Software, after jettisoning the hardware business entirely, and it focused on selling licenses for SourceForge Enterprise. And when that didn't work out, it became SourceForge, a collection of Web sites deriving revenue entirely from ad sales. And it has since changed its name again, to Geeknet.

Should be interesting to see if LinkedIn and similar social media firm IPO’s can capture the attention of long term investors.