According to KT, the device weighs 445 grams, features a one gigahertz CPU, and a 7-inch liquid crystal display. It also has a 3 megapixel camera and 8-gigabytes of memory storage. Users can download content from the firm’s own online application market, called Olleh Market, as well as from Google’s Android Market. 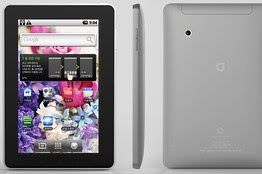