A Twitter user with an account dubbed BPGlobalPR is posting satirical entries about the massive oil spill in the Gulf of Mexico — and already has more than twice as many followers as BP America’s actual account. 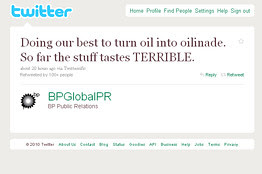 With posts such as “The good news: Mermaids are real. The bad news: They are now extinct. #bpcares,” the stream of tweets from the account is long on dark humor and subtle outrage at BP’s actions. It’s also peppered with responses to twitterers who did not know that the account was fake and were angered at the thought that an oil company would post content such as “If we had a dollar for every complaint about this oil spill, it wouldn’t compare to our current fortune. Oil is a lucrative industry!”