"The positions of Apple, Microsoft, and Amazon have been flip-flopping since the wipeout in the iPhone maker’s stock price late last year. The mantle has changed hands seven times among the three companies. Three of those switches have taken place over the past week as the big tech companies reported quarterly results. And Alphabet (Google’s parent company) has lurked not far behind the whole time.

The competition reflects the global economic concerns hanging over the markets as well as the changing technology landscape, and it’s a shift from past years. Apple passed Exxon Mobil to become the most valuable company in the United States almost eight years ago, and after 2012 it held on, largely unchallenged, for six years." 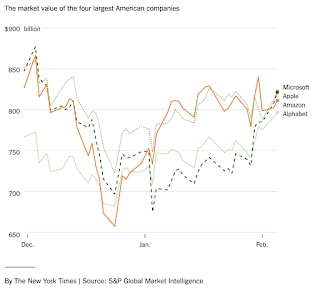 Biggest Public Company? Microsoft. Wait, Apple Again. Amazon? No, Back to Microsoft. | NYT
Posted by pbokelly at 7:07 AM