BlackBerry's Keyboard Is Back—But Will the Q10 Phone Sell? - WSJ.com

A steady share of a shrinking market; also see The BlackBerry of BlackBerry Users’ Dreams (AllThingsD) 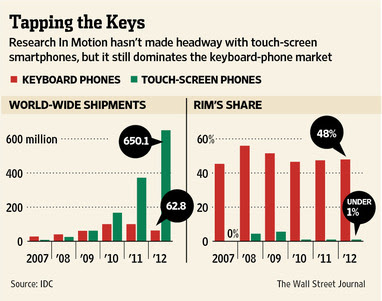 “The Q10 looks similar to the once-popular BlackBerry Bold, which was introduced in 2009 and was the last phone to run on the company's old operating system. It will have both a classic physical keyboard and a small touch screen and will run on RIM's new operating system, BlackBerry 10. Carriers and retailers are advertising the device at roughly $200 with a multiyear plan, putting it in line with other high-end devices on the market.
[…]
Last year, IDC estimated that the world-wide keyboard smartphone market was 62.8 million units, down from 100.2 million units in 2011. RIM's share of that market is 47%, according to IDC.”

BlackBerry's Keyboard Is Back—But Will the Q10 Phone Sell? - WSJ.com
Posted by pbokelly at 6:27 AM