A major milestone for Google Docs; also see the Official Google Blog overview for a video and other details.  The GigaOm article referenced below also highlights an interesting related trend – the increasing overlap between traditional productivity application models (seamlessly sync’d across multiple device types) and services such as Evernote and OneNote (e.g., when OneNote 2010 or OneNote Web App is used in conjunction with Windows Live SkyDrive).  A subtly significant competitive landscape is emerging for beyond-the-basics collaborative hypertext models, with one group of offerings (e.g., Google Docs, Office Web Apps, and Dropbox) starting with traditional file-centric concepts and another group (with Evernote and OneNote currently among the most widely-used offerings) starting with more Web-centric concepts.  Perhaps Google saw this shift coming when they terminated development on Google Notebook, assuming people using the multi-device, near-real-time sync’d version of Google Docs wouldn’t have much use for Google Notebook; I suspect the same market dynamics were part of the reason why Google Wave was shut down. 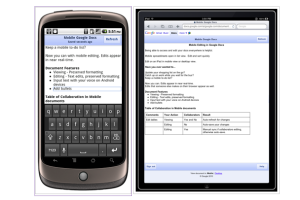 Collaborating in real time loses its value when you have to wait to get to a PC to contribute. By extending editing capabilities to mobile devices, it makes Docs a viable choice for mobile users who need mobile productivity tools. For tablets, it’s almost a must-have feature, as those devices supplant laptops for many people. Mobile editing is another selling point for living our lives in the cloud, as more of our computing shifts to mobile devices. It’s a good counter move to Windows Phone 7′s Office Hub, which includes the ability to edit and review Word, Powerpoint and Excel documents.

I think this will also be very helpful for users who want to write notes to themselves and view them later, like people do with Evernote.