Palm, Once a Leader, Seeks Path in Smartphone Jungle - NYTimes.com

Check the full article, along with this CNet story, for reasons why Palm is not yet dead

In recent years Palm lost its way. Its share of the smartphone market has been halved to about 16.9 percent over the last two years. First, Research in Motion found the sweet spot of business users with its BlackBerry. More recently, Apple grabbed consumers’ fancy with the iPhone.

Palm has tried to innovate beyond the five-year-old Treo with little effect. It announced with great fanfare last year that it would build the Foleo, a cross between a smartphone and notebook computer, only to cancel the project three months later. While cellphone makers like Samsung, LG and R.I.M. brought out products to compete with the iPhone, Palm has told Treo loyalists and investors to be patient. They will need to be. Palm’s stock price is down 90 percent since its high in March 2000. 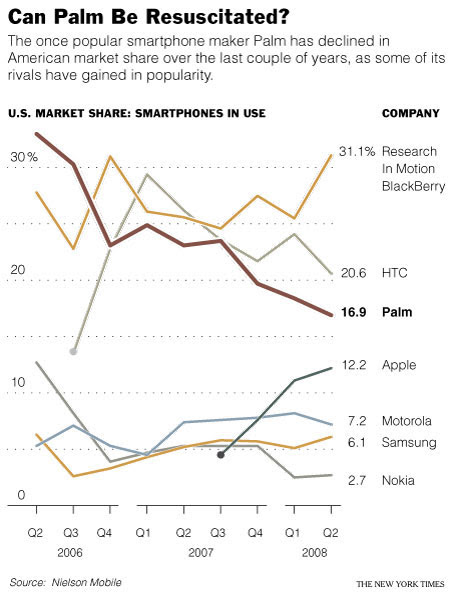