Another timely reality check from The Economist; excerpt:

The computer industry makes more antitrust headlines than others, and seems unlikely to shake off these problems, for three reasons. The first is that technology heavyweights are often dominant in their respective markets. Ask any of the bosses of these firms why they are so dominant and they will probably respond that it is a result of billions spent on research and development. But they also operate in markets that allow a winner to take all (or most). Mainframes and operating systems benefit from strong network effects: the more applications run on them, for instance, the more users they attract, which encourages programmers to write more applications for them. With microprocessors, ever-increasing capital requirements mean only the biggest firms can afford to build their own factories. The markets for search and online advertising exhibit similar effects: the bigger a firm’s market share, the greater its ability to attract advertisers, thus bringing in the money to build ever bigger data centres. In each case it is difficult for an upstart to break in. 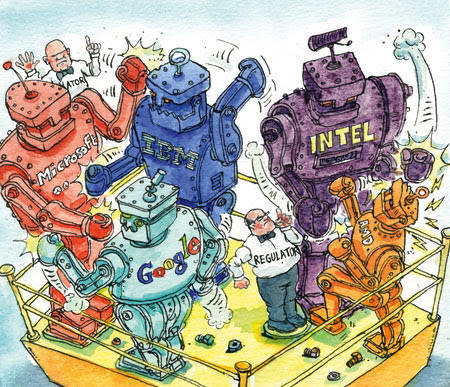 Read the full article, and also check out the increasing returns model sometime – the information technology business is unusual in several respects.

funny pictures. I like google and intel. google help us a lot in the daily life.