A more constrained Slack (at least in the enterprise)


"The share of large organizations that use or plan to use Slack next quarter has declined slightly to 33 percent while Teams has increased to 65 percent, according to preliminary surveys of company chief information officers and other leaders from market research firm ETR. So far for next quarter, ETR has measured responses from 845 of the world’s biggest organizations, including those in the Forbes Global 2,000, Forbes’ list of the 225 biggest private companies, and the US government.

ETR data also showed that 13 percent of large companies plan to decrease their Slack spending next quarter compared with 1 percent that plan to do so on Teams.

The general consensus among these big companies is that Slack may be a better product, but not so much better that it warrants paying for extra software on top of Microsoft Office, which they already require for business staples like Excel, Word, and PowerPoint." 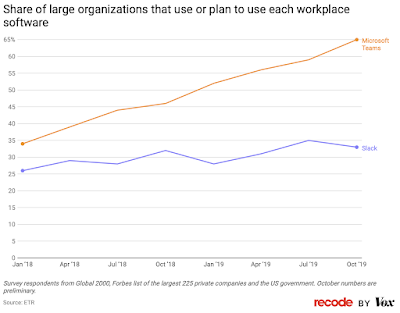 Startups still love Slack but big companies are bailing | Recode
Posted by pbokelly at 6:32 AM