In other Facebook + politics news, see The Myths of the “Genius” Behind Trump’s Reelection Campaign | ProPublica


"While all the major social media sites base ads on an individual’s online behavior, Facebook takes much of the guesswork out of it for advertisers. Millions already use it to talk about their fondness for one candidate, or dislike of another, so political ads can be aimed at exactly those voters most likely to respond. In effect, buying ads on Facebook should generate more bang for the buck.

If only. In fact, the cost of reaching an individual via Facebook is soaring, because so many candidates are vying for their support — as much as $100 in ad spending for every $1 in donations. And that means an even bigger payday for Facebook." 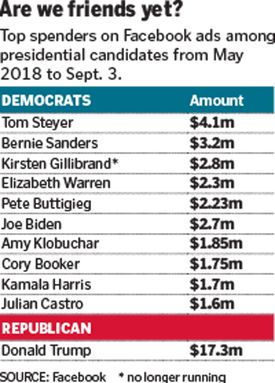 In 2020 race, Facebook winning the money game — again | Boston Globe
Posted by pbokelly at 6:30 AM